Before you lies a silken parchment of finest make. Upon it, the terms which you must agree to, if ever your Beloved has a chance to escape. It reads as follows, in finely sinister script...

"The undersigned, knowing the gravity and weight of their commitment to their current course, shall be given a single chance to lead their Beloved back into the realm of the living. They will be set upon the road which leads from Hades, and their Beloved will wander with them, trailing by a distance to be determined by the Lord of the Dead. However, once along the path, they agree to not turn or look behind in any manner, lest they forfeit their opportunity entirely, and eternally damn that which they so love. These terms, as stated, are final, and not even the Fates shall interfere with such matters on the behalf of either party."

It begs for your signature, and you relent, a drop of blood sealing the scroll, before you set out on a desolate road amidst the Stygian Abyss.

In the distance, however, a figure lurks at an abandoned gate. Beyond him lie many trials along the road you chose to walk here…

Way Down Below is a solo journaling Descended from the Queen game of love, sacrifice, and the Underworld as inspired by the myth of Orpheus and Eurydice, designed by Kienna Shaw (@KiennaS) and Jason Cutrone (@JustJasonPls).

Take on the role of a Wanderer and embark on a journey to bring back your Beloved from the clutches of Hades. Along the way, answer card-drawn prompts about your past, your Beloved, and your psyche to build out your own myth until you must make the final choice: will you turn around and see if your Beloved follows?

All you need to play is the rules, a standard deck of cards, and pen and paper.

In order to download this game you must purchase it at or above the minimum price of $15 CAD. You will get access to the following files:

Claim a free copy of Way Down Below (for those who are marginalized or who are in need). Copies are limited, but will grow with each bought copy. 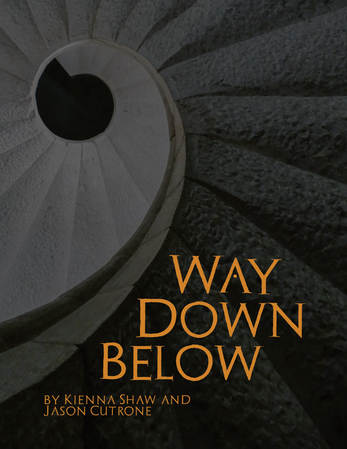 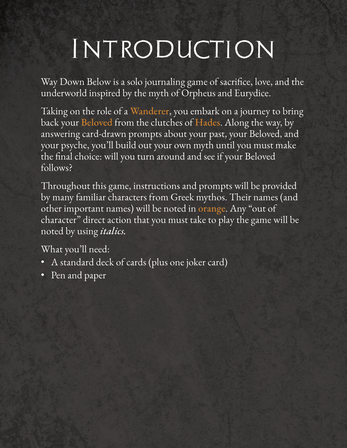 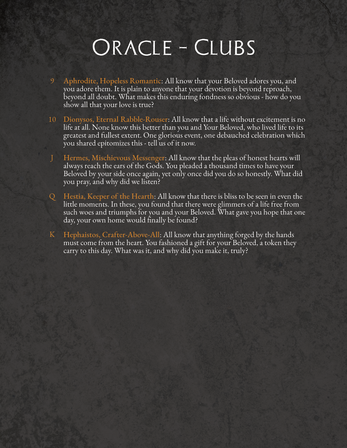