You are otherworldly immortal beings, split across heaven and hell.

Together, tell the story of your relationship over the eons, stolen away in hidden moments.

Heaven Nor Hell is a prompt-based  tabletop roleplaying game for two (or more) players that requires a d10.

V2 has a new layout with new graphics, alongside updated wording and rules to account for more players and different kinds of relationships.

Originally made for the Pride #GaymeJam2k19

Special thanks to Jason for the help and inspiration.

In order to download this game you must purchase it at or above the minimum price of $10 CAD. You will get access to the following files:

Claim a free copy of Heaven Nor Hell (for those who are marginalized or who are in need). Copies are limited, but will grow with each bought copy.

I have had the honor of playing Heaven Nor Hell more than once, and I must say, this game accomplishes its purpose so well.

I especially appreciate the section on the type of relationships you can play. As someone who has an extensive chosen family, being able to define individual relationships with people while still knowing as a group that you love everyone there, is so powerful. Love is not treated as inherently romantic or sexual in the game, but is rather treated as love; open, steadfast, and caring.

The 10 prompts you are given for the game are specific enough to give you ideas, but vague enough to let you design entirely different scenes. In the multiple times I've played the game, I've gotten some of the same prompts, but the scenes that were created were wildly different. A scene in Grecian baths with philosophers in the background fighting with a plucked chicken, and a scene of a beach picnic with a proposal were pulled from the same prompt.

The game is inspired by Good Omens, but it goes so far beyond it. You are in charge of the ship here, you decide how you feel and develop your characters and their story.

This game is perfect for someone you're romantically involved with, a polycule, or even a close friend.

As per usual, Kienna has done incredible work, and this game remains as one of my favorites.

Ahh, thank you so much RK! It always makes me so happy to see you play the game and my heart is so warm with these kind words <3

Heaven Nor Hell is a three page, two player rpg with solid layout and a potent (usually romantic) premise: you are two supernatural creatures that the powers that be will try, and fail, to keep apart.

Basically, if you liked the TV adaptation of Good Omens, there's already something for you here.

Beyond that, the mechanics are extremely simple. You frame scenes on your own, sometimes rolling a d10 for a prompt, and you make all significant decisions by yourselves.

The game's hook and internal tension are already baked in, so you don't have to work to challenge and support your characters' relationship. You can just support it, while occasionally referencing that god and the devil don't want the two of you to kiss.

Incidentally, while Heaven Nor Hell introduces itself as a two-player game, there's nothing mechanically preventing it from having more players. You may want to make up other planes for additional players to be from, but the story still works if two people are from hell and one from heaven, vice versa, or any other combination with other numbers.

By a similar token, the game works for nearly any relationship, and it's just as playable with the "you love each other" bit removed---as long as the other emotion is also strong.

Overall, this is a really solid idea executed effortlessly. It's easy to set up and play, and it doesn't take a lot of energy to run. If you like romantic games (or games about friendship,) I would absolutely recommend giving this a shot.

Wow, thank you for such an in-depth review! I'm really glad to hear that it works for other relationships (I kept "love" to be fairly open whether it meant romantic/platonic/whatever else), and it's super cool to hear it also works for more players too

asked my crush to play this with me, wish me luck 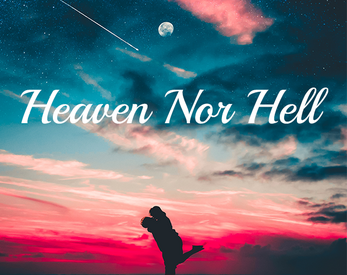 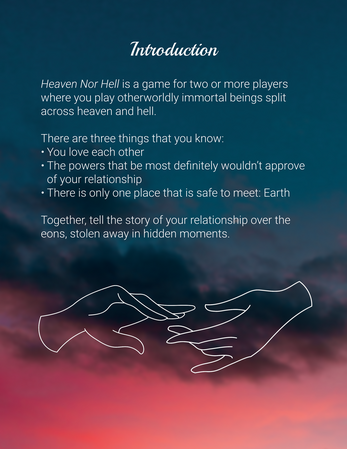 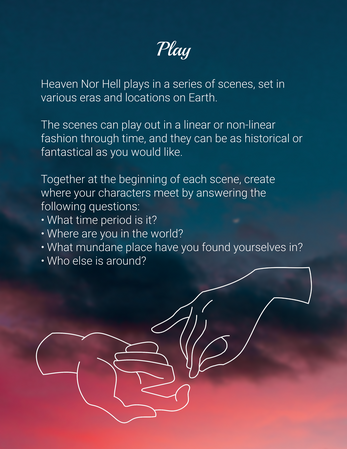