Arcon 2.0 is now live over on Metal Weave Games!

Head over to https://metalweave.games/products/arcon to get the latest edition of the setting, including all of the expanded content made possible by the successful itchfunding.

Disclaimer: this itchio page only hosts the first edition of Arcon, and will be used mostly for archival and announcement purposes.

Arcon, like many cities in the year of 2096, has a plethora of locales to explore. Various companies and manufacturing agencies occupy entire neighborhoods, carving for themselves little fiefdoms within the sprawl, while Punkers, Workers, and all manner of folks besides take it upon themselves to do some carving of their own, building towards a better future from the pile of rubble called “history.” From the corpo-ridden skylines of Downtown Heights, to the irradiated Plains of Penance, fit for only the most adventurous of Droods, yes, Arcon has it all.

Within Arcon, you will find so much more than a simple city in a desolate waste, bathed in neon daylight. Within this book, you will find a world that holds countless streets and avenues to explore, adventures that will lead far beyond the bleeding edge of modern technologies, and opportunities to take a true and decisive stand against the powers that be and maybe, just maybe, come out on the other side in one piece.

Enjoy your time in the City of Neon Daylight!

As featured in Dicebreaker: https://www.dicebreaker.com/games/arcon-city-of-neon-daylight/interview/arcon-rp...

In this book you’ll find:

What formats it comes in:

What our potential stretch goals are:

Bigots and fascists are not welcome to use Arcon in any way, shape, form, or fashion. It is a city that is open to all ethnicities, faiths (or lack thereof), gender identities, sexualities, (dis)abilities, and marginalized groups, and such support is reflected in the text explicitly.

The content and themes explored in this book include resistance against capitalistic exploitation, classism and economic inequality, and violence that can occur in a highly capitalist society on a societal level as well as an individual one. As well, cybernetics and heavy body modification is featured heavily in Arcon, and this can cross over into potential areas of body horror.

In order to download this setting supplement you must purchase it at or above the minimum price of $25 CAD. You will get access to the following files:

Support this setting supplement at or above a special price point to receive something exclusive.

Claim a free copy of Arcon (for those who are marginalized or who are in need). Copies are limited, but will grow with each bought copy.

Can I create content for Arcon? I want to make some tools for my table, and it could be nice to put it on itch. Thanks! This is a great setting.

Oh wow, that's awesome to hear that you've been inspired to make tools for Arcon. Yes absolutely, just please credit Arcon (and both Kienna and Jason) for the inspiration, and just make it clear that it's not official content for the setting. Thanks so much!

We will definitely visit Arcon City on our next venture. Thank you so much for making this great Cyberpunk supplements, Kienna, Jason and team. Have fun and good luck on all your projects.

Thank you so much for the kind words!

Hey sorry if something I posted was a problem I was coming from a genuine place of interest and desire to learn. I assume it's the situation of "if you have to ask the price you can't afford it" or I guess " if you have to ask if you can use an rpg not meant for you, you can't" all the best with your work. I really feel like I'm in the face of "Forbidden knowledge" I'm told not to read and it makes me want to check it out even more lol but I will respect your wishes :) You are doing a great service to the community! All the best!

Yeah I'm not so sure of myself or blind to my own faults that I wouldn't consider myself a bigot. I guess I've never been called out before and told I can't use an rpg because of my prejudice but I kind of get the idea of gating I guess. You don't want to put your work in the hands of those who might misuse or miscontrue  it? which has come up with some movies and books I feel. But it's hard to know like when you've totally dealt with your prejudice that often rises up without quite thinking (though I know that's no excuse) but like its a goal to work towards to try a cool cyberpunk setting. It's admirable because so many works are in someway built to accept bigotry or not call it out or subtly encounter it so I hope more people disallow with prejudice from consuming content they produce cause that might be that little extra incentive to get better especially with societal and peer pressure to hold to your views and find reasons you deserve your privilege.

Really happy there's a setting out there trying to move cyberpunk past the 80s.

I really don't want to see cyberpunk go the way of the western which was largely lost after Vietnam shifted the cultural landscape, and it never really recovered in film and cinema.

Oh my God, thank you guys for addressing the biggest elephant in the room with Cyberpunk as a genre. It was a compelling lens to analyze the problems of the day back in 1980, but Gen X's fears are just not fully relevant in 2021. It's a different world and it's moved in ways no one could have predicted -- and other predictions have come true -- but the genre still has a death grip on neon lights and shitty tropes.

I could rant about this topic for hours.

Really happy to see this doing so well. I'll probably donate soon; gotta check my budget. Best of luck, y'all!

Thank you for the well-wishes, and we appreciate all the support you can offer! And Arcon was born from hours-long discussions of Cyberpunk, so you are in great company here. In fact, I would highly recommend a talk that Kienna themselves actually contributed to over at twitch.tv/aznsrep on the genre's historical roots, its issues with Orientalism (which directly contributed to one of the truths we implemented in this supplement), and ways we can build from it!

VoD of the discussion here:

I'm diving in to the book right now. This may be a little premature, but I'm (currently) softly critical of exactly one aspect of the book -- the portrayal of violence (note: not crime).

One of the fears of the 80s that's grown stale in the Cyberpunk genre is the suburban hysterics that "inner city violence will spread and be inflicted on us all"; Arcon seems to portray that directly, widely, and unashamedly. It reasons it well and it makes sense for a world that is more or less a disaster zone, but (at least not in the section titled "Violence and Crime in Arcon") not without overlooking some core things.

Using Compton in the 80s as an example; the majority of violence in Compton was gang warfare related -- local power struggles. It wasn't violence that was occurring without context; it was the marginalized fighting for authority in a power vacuum, where law was unwilling or unable or unwanting to step in, and where their communities were left to rot. The portrayal of violence in Arcon seems to want to show these groups struggling for power as wholly bad, and not victims of circumstance. I think it's having difficulty divorcing this violence from the "good vs. evil" trope that emerged in all TTRPGs in the 80s. It's further accentuated by the lack of a prison system in the world (when for-profit prisons are a massive aspect of a capitalistic nightmare world and a key part of class warfare).

Take from that what you will. Really digging the book outside of that, and I'm curious if it gets fleshed out later. Cheers!

Thanks so much for the close read and feedback! It's a lot of really good stuff to think about.

My personal intention with writing the violence and crime section is that there's a lot of different reasons/contexts that violence is occurring within Arcon. Some of it comes from groups struggling for power with each other (like the gangs/cliques that want to establish their ground and authority), some of it comes from the fact that the only vehicle to express the frustration with their circumstances, and overall, it comes from a world where things are terrible and the system tends to encourage it.

I did intend to make it so that violence in Arcon isn't within the good/bad dichotomy, especially to avoid the idea that it's the individual's fault and not the system of oppression that makes people the victim of these circumstances, and also to make sure we weren't condemning the "punk" side of things. It's probably something for us to revisit in the next version with 2.0 to make it more clear what our intentions were!

Never mind, getting caught up on the news!

supporting the work and I tipped it over the 3K line! :)

Ahh, thank you so much for getting us over our goal!

Anyway, great idea, just bought it. Thanks for providing a setting focusing on how the dystopia of cyberpunk is supposed to be classist, not ableist :)

Yooooo, you already know some people have vision impairment because you talk about screenreaders... so what's with the super-low-contrast header?? I legit thought those numbers were unlabeled at first.  (Apologies if this is an Itch.io default, or even a setting of mine somehow, but I've never seen it before. FF on Win10.)

Entirely on itchio, I haven't been able to find a way for us to change it unfortunately! It's been a frustration personally as well

I feel like ever since Cyberpunk 2077 was first announced nearly 10 years ago, there was a sizable shift in gaming: tons of cyberpunk games (both digital and analog) started getting made.

Of the dozens and dozens of media I’ve seen set in future dystopias, very few have actually managed to breathe new life into the genre for me. Until now.

I’m only 20 pages in and Arcon has reawakened my previously jaded love for Cyberpunk. Thank you so much for making this! I’m excited to try playing in Arcon someday.

Are there any systems that you feel best capture the same truths that Arcon speaks to?

Thank you so much for the kind words and praise! I'm so glad that Arcon is doing as intended as a refreshing new version of cyberpunk

We didn't design for any system in mind, but all of those sound about right. We also highly recommend CBR+PNK!

I'm so glad to hear you've found the material so wonderfully compelling and revitalizing of your love of the genre! Personally, I would highly recommend CBR+PNK by Emanoel Melo! Especially for one shots. Outside of that, I would say go for whatever your playgroup is most comfortable with. Thank you again for purchasing Arcon! 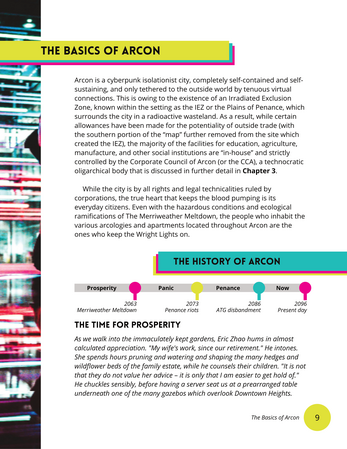 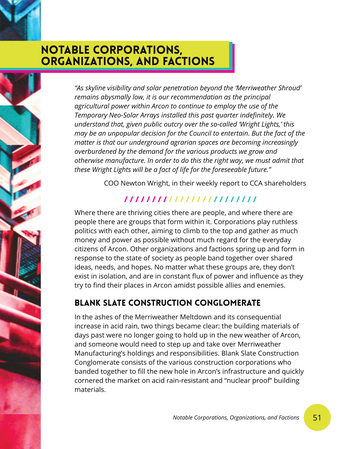 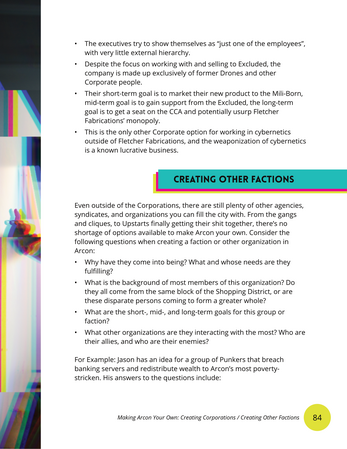 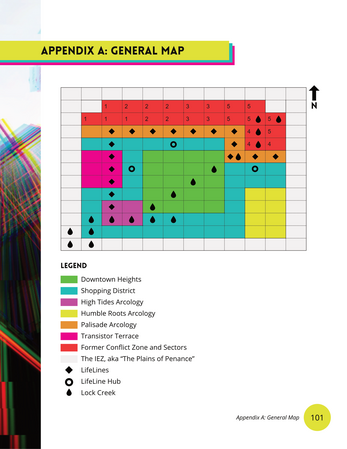